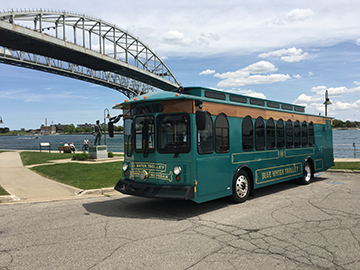 Blue Water Area Transit celebrates the agency’s 38th season of providing seasonal fixed-route service on our historic trolley. The trolley runs throughout the summer from noon to 5 p.m., Monday through Saturday, June 6, through September 3. The Autumn schedule is Saturdays and will continue until October 15.

Recognized as one of Michigan’s best values, Blue Water Area Transit’s one-hour trolley route features over 50 local points of interest. The trolley swings by museums, churches, beaches, the Fort Gratiot Lighthouse, and other historic landmarks. It travels through the heart of Port Huron and along the riverfront for a panoramic view of the Blue Water Bridges and the Thomas Edison Statue and Train Depot.

“The Trolley offers an overview of local history aboard an old-time trolley vehicle for only 10 cents,” says Blue Water Area Transit general manager Dave McElroy, “which is the amount patrons paid in 1866 for the area’s first local transit service!” BWAT’s aquamarine trolley runs on eco-friendly compressed natural gas. It is also ADA-compliant for elderly and disabled passengers. It was designed and manufactured by Home Town Trolley Company of Crandon, Wisconsin.

“Although the Trolley is designed for visitors, it’s also very popular among those of us who live in the Blue Water Area,” says Anita R. Ashford, Blue Water Area Transportation Commission Board vice-chair and Port Huron City Council member. “It’s a fun, learning experience for the whole family.”

Passengers can get on and off the trolley at 17 points along the route, including hotels and marinas. The official starting point is the Downtown Blue Water Transit Bus Center, 720 McMorran Blvd., across from McMorran Place.)  Besides being on BWAT’s website, (http://bwbus.com/blue-water-trolley/ ) the points of interest and boarding points are listed in the official trolley brochures available at the Convention Center, Chamber of Commerce, and many retailers throughout Port Huron.

Discounted (five-cent) fares are available for senior citizens (60 and up), as well as persons with disability or valid Medicare cards. For an additional fare, trolley riders may also connect with Port Huron’s citywide transit system that serves local shopping and industrial centers throughout the area.

The Trolley route and hours are subject to change. Please contact Blue Water Area Transit at (810) 987-7373 or check the website for up-to-date information.

Blue Water Area Transit continues the proud tradition of innovation that was started more than a century and a half ago by William Pitt Edison. The older brother of world-renowned inventor Thomas Alva Edison started a horse-pulled trolley service in 1866. After that, he switched to horse-pulled streetcars guided by rails along several local routes.

Port Huron became one of the nation’s first communities to operate electrified trolleys in 1886 and then motor coaches in the late 1930s. After an eight-year hiatus ended in 1976, Blue Water Area Transit became the area’s first publicly funded bus service. Since then, BWAT buses have carried more than 34 million rider trips.

Six days a week (Monday thru Saturday), BWAT provides ADA-compliant, ramp-equipped bus service. BWAT buses travel in 45-minute intervals along seven fixed routes in Port Huron and Fort Gratiot. Also, BWAT operates commuter service along an I-94 express route and an M-29 local route with stops in the cities of Marysville, St. Clair, Marine City, Algonac, Anchorville, and the townships of Clay and Ira. BWAT also provides dial-a-ride service in the townships of Burtchville, Port Huron, and Fort Gratiot as well as the city of Marysville.

BWAT started producing its own compressed natural gas in 1996 and ranked as Michigan’s largest producer of the alternative fuel. The transit agency ran the state’s largest fleet of natural gas-fueled buses for more than 20 years. It operates four public CNG fueling stations. Additionally, in 2021, BWAT became the first public transit agency in Michigan to operate electric transit buses in its transportation fleet.